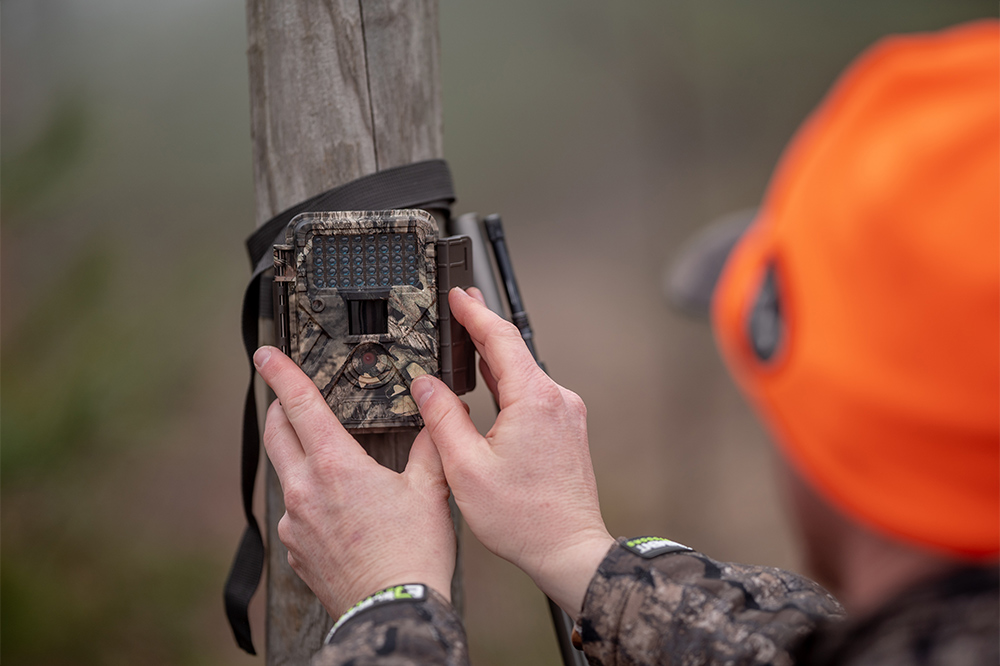 Want to capture mature-buck intel that you can actually turn into a hunting strategy? Hang your trail cameras in these key locations during the early season and leading up to the rut.

Most of you have probably had trail cameras placed spring or early summer. If you’re like most hunters, your cameras have probably been monitoring salt, mineral and feeding sites (where legal), or agriculture like alfalfa, clover and soybeans. These locations are excellent for taking buck inventory beginning in the early summer and lasting into the first couple weeks of bow season.

As seasons shift, temperatures cool and daylight shortens, bucks feel the testosterone surge. Dominance is established, and bachelor groups of bucks part ways. Sparring activity is common between bucks, and then as October ages, things intensify.

All of this is to say that mineral sites and summer feeding areas aren’t necessarily still the optimal locations for your trail cameras. Sure, if you own enough cameras, you can leave a few in these locations, but the following locations are where you’ll most likely capture mature-buck images. Plus, these locations are typically more suitable for hunting. Let’s review.

Scrapes are often viewed as rut-only deer sign. However, I’ve observed freshly worked scrapes at all points of the year, and here I include late May while turkey hunting and mid-August while summer scouting. However, the number of scrapes multiplies late in September in some areas, and especially by mid-October in most areas. Since scrapes can be found in various settings, it’s important to understand what they mean for hunting based on where you find them.

Field-scrapes, particularly where hunting pressure is moderate to severe, are used almost exclusively at night. Immature bucks might paw at them during the afternoon when they come out to feed, but the big bucks most often stage in the timber away from fields and then come out well after dark. Knowing that, don’t get too excited about hunting over a big field-edge scrape. It can be a great starting point for capturing a mature buck on your trail camera, but you’ll most often have to investigate deeper in order to locate a suitable place to ambush that buck, most likely closer to his bedding area.

If you’re hunting on public land, sometimes you’ll see scrapes on logging roads or hiking trails that lead into the parcel. I ignore these entirely. I don’t want my trail camera exposed to everyone who walks the road or trail, and I know with all of the human foot traffic that bucks will use the scrape little, if at all, in daylight. Immature bucks usually make these scrapes.

In my opinion, the best scrapes to hang trail cameras over in order to target mature bucks in areas where you can effectively hunt them are ones that are in a line protruding from bedding areas. You might see a dozen or more scrapes plus a bunch of rubs. This is usually the area where the buck stages prior to traveling toward feeding areas, so the odds of daylight pictures and a daylight encounter while hunting improve.

During the period immediately before a buck begins chasing does — mid-October through about November 2 in most areas — this is a great location to ambush him. When you go in to look for such areas and hang cameras, you must have the wind in your favor and be extremely quiet since you’ll often be within 100-300 yards of the bedding area. Try to pick a windy and/or rainy day for the ultimate disguise.

Travel routes such as benches, pinpoints, hourglass draws or river crossings can be very effective places to target mature bucks with your trail cameras. This is especially true when they connect bedding areas with feeding areas, or when they lead from one bedding area to another. Focus on the ones that facilitate feeding traffic earlier in the pre-rut, and then later in October when bucks start their cruising antics, focus on travel corridors that connect doe bedding areas.

Areas where doe groups assemble to feed can be good places to hang trail cameras and also hunt prior to peak breeding. Young bucks are usually first on the scene to pester the does. However, the mature bucks usually aren’t far behind.

The best placement for trail cameras in this setting is to consider the prevailing wind direction and then set the camera on the downwind edge of the feeding area, especially if trails enter that edge of the field or food plot. Bucks will scent-check does here, and sometimes they don’t even enter the food source to do it. Late in October and during the first few days of November can be productive at these locations. When you get a daylight picture, zone in and hunt if the wind allows. 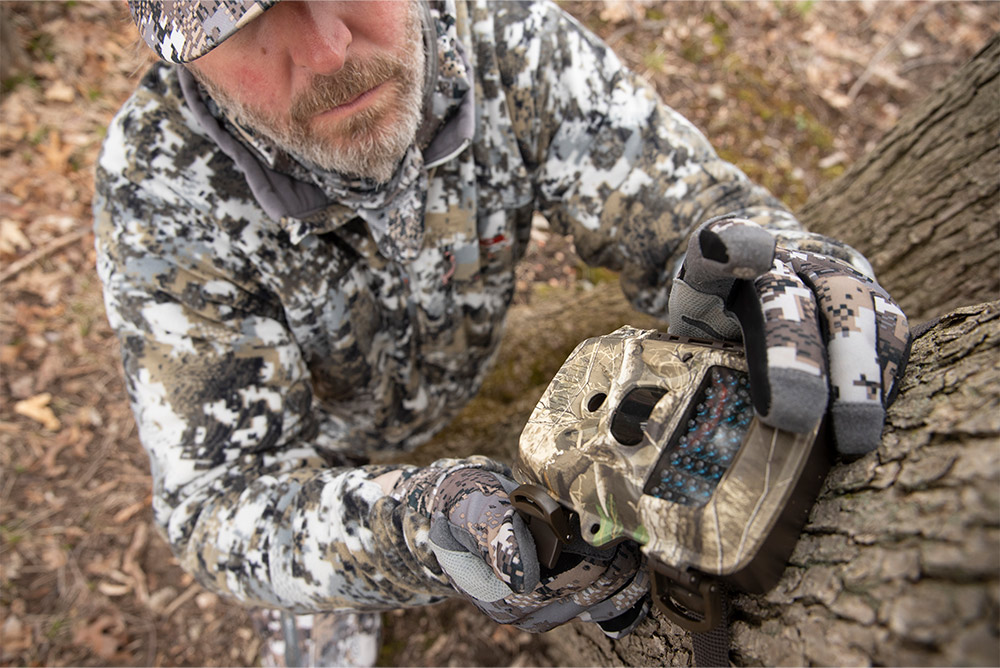 Acorns usually begin falling early in the autumn and all the more as fall progresses. Deer prefer mast crops like acorns, and it’s not only because they’re beneficial food. The locations in which they occur are another reason. In other words, bucks need not expose themselves in field feeding areas when a bumper acorn crop exists in the security of the timber.

Oak ridges are usually easiest to hunt and hang trail cameras on of all places where oaks exist, and this is because the ridge typically serves as a thoroughfare, necking down deer traffic to a suitable distance for bowhunting. Trails are generally distinguishable, and so are primary feeding areas on the ridge. Just look for acorn caps and disturbed leaves where noses have been marauding for the little nuts and hang a trail camera there.

A deep-woods kill plot, maybe an eighth to one quarter of an acre, is a great place to target bucks with your cameras for the purpose of hunting. Often, hunters design these little plots in between known buck bedding areas and larger ag fields, and even mature bucks will sometimes hit these little snack stations in daylight. Hang a camera or two here, and then swoop in and hunt immediately when a big buck daylights on the kill plot.

Water sources, especially in areas with minimal creeks, ponds and lakes, can be productive trail-camera and hunting locations, especially when they’re near bedding areas or food sources. The best water sources are nice little waterholes or ponds that offer plenty of security cover. I’ve hunted over water all day during hot conditions in late September, and it’s not uncommon when temperatures are in the 80s or 90s for deer to visit anytime. I’ve seen deer at noon, mid-afternoon and right before dark. Of course, larger bucks still usually focus their water visits to the first and last hour of daylight. But, the beauty of hanging a trail camera there is that you can see what's visiting the water all day long.

The trail-camera locations we’ve discussed here are not only great places to capture mature bucks on your SD cards, but they’re typically quite suitable for hunting. If you’ve been having little to no luck in your usual places, give these a try. I don’t believe you’ll be disappointed.